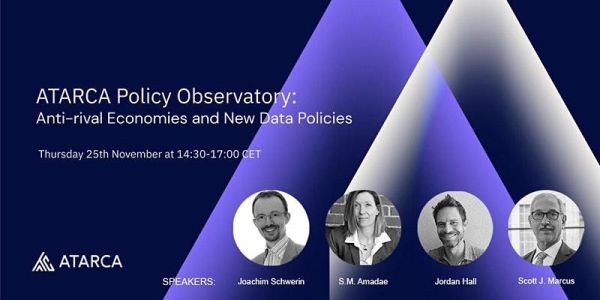 While the global economy is increasingly centered around data, the data economy and markets remain flawed. We still depend on centuries-old assumptions of scarcity that do not hold for digital goods, which are abundant. The H2020-research project ATARCA suggests that many digital goods are anti-rival by nature: they gain value the more they are shared. Therefore, they fundamentally challenge current economic structures and institutions. Anti-rival goods also pose untapped potential for more sustainable socio-economic structures, such as local cooperatives. However, current economic and political structures and institutions are not prepared to handle anti-rival goods. That’s why we gathered around 30 researchers, policymakers and experts to the first ATARCA Policy Observatory session on 25 November 2021 to discuss these issues.

Three lighting talks provided inspirational openings on fundamentals of anti-rival goods, practical experimentation with them and how the current European policy landscape facilitates this.

Dr Sonja Amadae, the Co-Principal Investigator of ATARCA discussed the project’s anti-rival use cases and defined their policy implications. Dr Amadae highlighted how the concept of anti-rivalry can enable data sharing for a greater purpose: for example, environmental sustainability in the food supply chain. She introduced ATARCA’s Food Futures Index, a self-curated database that gathers data on food production and its impact on air, water, nutrition, and animal welfare. The FFI supports more informed decision-making on sustainable food consumption by consumers. It also incentivises user contributions to the index through tokens earned for positive impact, which can potentially be turned into environmental certificates, discounts or subsidies on a community level.

Jordan Hall, founder of multiple disruptive technology companies and decentralised governance expert, underlined the transformational nature of anti-rival goods. He argued that anti-rivalry is not an invented concept but something that exists naturally in reality—just like rivalry and non-rivalry. Despite this, society is not entirely ready to accept anti-rivalry yet; this requires a profound shift. He likened this shift to riding a new type of bicycle: we must accept that we will fall but we have to keep trying. The central question is: what does it mean to cultivate anti-rival relationships?

Dr Joachim Schwerin, a Principal Economist in DG GROW, Unit G/3 Digital Transformation of Industry, shed light on the EU Commission policy perspective on the token economy. The decentralisation of data requires a whole new approach to policy and regulation. Emerging Commission policies, such as MiCA (Markets in Crypto Assets), support regulatory sandboxes to foster innovation in distributed ledger technology (DLT) such as blockchain. In a nascent field like this, policymakers must look at local projects, like REC, to further their understanding of the needs that arise. The need for experimentation is also reflected in the emerging understanding of the nature of data, spearheaded by policies such as the GDPR that aim to empower citizens to control their ‘own’ data. To end, Dr Schwerin called for a need to keep the approach radical as ATARCA moves forward in experimenting with digital assets.

Challenges of the data economy

These insights and the following discussion eased the participants into group work on the current challenges of the data economy:

First, many of the identified challenges gravitated around artificial scarcity, in other words trying to apply existing economic logic to data and other abundant anti-rival goods. Anti-rival resources are unlikely to be governed well with systems used for scarce resources. Paywalls in news sites were raised multiple times as examples of digital product features that artificially create rivalry to fit the existing economic paradigm.

Second, the anti-rival goods connectedness to other digital technologies emerged in the discussion as one of the key points. Anti-rival innovations and decentralisation are tied to other emerging initiatives—like ethical and transparent data, trustworthy AI and privacy preservation techniques. Similarly, anti-rivalry is linked to data portability, missing incentives to share data (while also considering privacy and inclusion of marginalised citizens) and technological investment for these purposes, especially within SMEs. Due to these parallels, one has to look at anti-rivality holistically, not merely focusing on blockchain-specific policies like MiCA.

Third, existing cultural norms, expectations and conceptions of data arise as one of the central challenges. Participants noted that data and tokens are a residue or historical record of action, thereby putting the focus on anti-rivality of the underlying action. Decentralised systems function quite differently from the current centralised ones, making decentralised solutions difficult to implement. This mandates a shift in mindsets. Moreover, even in the Blockchain space, the discourse revolves around Bitcoin and ETH mining, overshadowing new protocols and advancements such as Proof of Elapsed Time.

Anti-rival opportunities to solve the challenges

In the group discussion, many participants focused on how the tragedy of the commons could be alleviated—especially in the case of environmental degradation. Anti-rival attestation systems like open CO2 registries or markets could increase transparency through decentralised records based on DLT, thereby helping to tackle climate change while empowering local communities in the process.

Some participants considered DLT-solutions an anti-rival technology per se because of its decentralised nature, while others were more sceptical of the whole concept: data-driven business models are founded on scarcity, and data sharing removes the incentives to provide service at all. To what extent can anti-rival thinking challenge monopolies or escape the existing rival practices?

According to the workshop participants, one of the possible policy implications of anti-rival technologies could be tax reform. As anti-rival economies and non-payment currencies expand, they challenge the current national taxation systems by legitimising the informal economy. The existing policy regimes cannot keep up with disruptive technologies, so governments need to adopt a vision-driven approach to applying DLT rather than purely reactive regulation. For example, they could first identify existing social problems that blockchain can solve, for example by fostering local data commons and currencies and only then building a political strategy to that end. Governments could also prioritise funding (e.g., through Horizon Europe) that focuses on the ‘evolvability’ of technological systems by the users themselves.

Finally, the discussion illuminated ATARCA’s links to existing EU priorities, such as bolstering data economy and data sharing. Better sharing of industrial data within the single market is already one of the main goals of policies such as the Data Governance Act, yet the incentives for such altruistic sharing are still largely missing. This is where the anti-rival goods and economy can play an important role. This was also echoed by J. Scott Marcus, a Senior Fellow at Bruegel, who in his closing remarks drew parallels between anti-rivalry and concepts of conventional economic theory such as network effects and natural monopolies. Traditional economics can teach us a great deal about anti-rival services, such as how to approach the adoption curve, tendency to monopoly and network effects of platform companies.

The disruptive potential of anti-rival economics and tokens need to be explored through extensive stakeholder engagement. The ATARCA Policy Observatory sessions aim to create and share policy understanding of anti-rival economics in the context of data economy and tokens. The process consists of four Observatories that address different dimensions of ATARCA’s core questions: 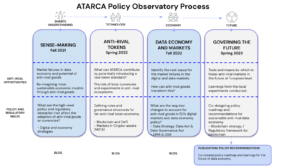 The session marked the first observatory session of ATARCA, but the work continues. Through the observatories, we will keep exploring opportunities of anti-rival goods to support building fairer and more sustainable socio-economic structures, and identify the required policies and changes for anti-rival governance to foster economic development. The process will result in concrete policy recommendations.

We wish to thank all the participants and look forward to seeing you in future Policy Observatories!

Accounting Technologies for Anti-Rival Coordination and Allocation (ATARCA) focuses on technological development and use cases for anti-rival tokenism. It aims to discover new ways to organise the digital markets, which have been failing because we have been busy organising them around the established categories of economic thinking. This is however an insufficient approach to understanding and realising the potential of digital markets since they open up new horizons and logic for human economic interaction and behaviour.