What do we mean by data? – a moment for creative discussion at the ATARCA Untitled Session 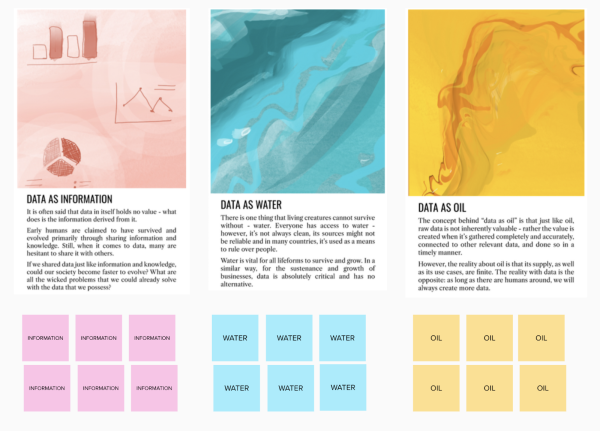 At left a close-up of some of the data metaphors explored in the untitled festival session.

What if we looked at data as we do at water, sunlight, or currency? As digital data is a relatively new phenomenon, it is fruitful to consider the implications of treating it as we do the more established parts of our economic and social systems, such as labour, oil, and currency. This thinking exercise may highlight challenges and new questions about the position of data in our current economic paradigms, and societies, and what this means for anti-rival economic thinking.

As part of the European research project ATARCA, Demos Helsinki held the policy dialogue session at the Untitled festival in September 2021. The session was geared towards imagining new metaphors for data and to discuss the social and political implications of an anti-rival economy. The principal investigator of ATARCA, Ville Eloranta, opened the session with a talk on market failures in data economies and data sharing. Through a data metaphor card exercise developed by Aalto University IDBM students, the session sought to playfully think about data and the anti-rival economy in imaginative ways. Below we highlight some of the emerging ways to conceptualize data:

What if we think of data as sunlight? One observation that arose during the session was that data and sunlight do not get depleted when they get used by more people (unlike physical resources, such as minerals). However, the costs of using both data and sunlight do still create barriers for their widespread use. The resources, like time, technology, and education needed to process and effectively utilise data, mean that despite it being anti-rival in theory, it is not accessible to everyone. Because the economic cost attached to processing and interpreting data restricts many groups that could benefit from data from accessing it in current market structures, this creates major inefficiencies for anti-rival economics to resolve.

A metaphor that highlighted the social inefficiencies created by governing data through current market institutions and economic structures was the metaphor of data as art. Data, like art, gains its value to wider society through its use. However, to the individual owner of the data, there is little incentive to allow open access to their resource, as they know it holds monetary value. This often results in data and art being stored far away from where they can provide the most use to broad groups of people, with their owners waiting for a good moment to extract a profit from them.

As has been done for art in publicly open museums, subsidies and government support can create the open access to data that we need to fully capture its positive potential. The market failure created by conventional economic paradigms shows both the challenge and the potential that anti-rival thinking has in creating more efficient and desirable outcomes for society.

By looking at data as capital, we can also see how access to data funnels powers into a limited number of hands, as does capital. This raises pressing questions about the relation of current economic models in shaping the way power is created and distributed, and how anti-rival innovations may have broader societal and structural impacts beyond their impacts on the economy.

These were but a few of the excellent metaphors developed during the data metaphor exercise and following discussion. The used metaphors highlight that access to data is connected to how the world in many ways can be seen as divided between the haves and the have-nots. Significant amounts of power and influence over the future of society and our material environment are controlled by large corporations. The discussion clearly showed the challenges of the currently dominant economic paradigm. The session was the first policy dialogue session of ATARCA. We will continue the research, experimentation and dialogue around the economic paradigms aiming to explore the potential of, and the conditions for an anti-rival economy based on distributed ledger technology.